When people find out that I make jewellery for a living they are usually quite interested, but the conversation really gets going when they ask a question like:

Do you stock many galleries or shops? My answer goes along the lines of ‘I make one off pieces, so I tend to sell directly to my clients’. This is when I see their expression change. They want to know how do I keep getting new ideas, and don’t I ever run out of them? Where do you get your inspiration?

These are good questions. Firstly where do good ideas come from for a start? You hear all kinds of stories about where people find inspiration. Of course, everyone has a different answer. We’ve heard of artists being inspired by love, adversity, the natural world, and everything in-between. I can call to memory lots of these myself but it’s really hard to pin down or list exactly where my ideas come from. I will talk about one of these in a bit.

Sometimes the ideas will stop. We usually call this “writer’s block” and I think most of us know the feeling when trying to create something, whether we write or not. That bit when you can’t see where the thing is going. You look at the project and don’t know what to do next. I used to have a lot more of those moments in my work when I started out. I put this down to trying too hard, wanting to design something that other people would like, and buy, rather than pleasing my own creative wants.

If you listen, you will always hear the sound of marketing experts talking about Branding and what’s “On Trend”. And it’s hard not to hear it when the bills are coming in thick and fast and someone is waving the ever promising recipe for “success” at you. I can say that pretty much every time I have one of these experiences (let’s call it “Maker’s Stump”), it was because I had lost the courage to follow my heart.

A lot of very well-meaning people have seen me making a design that they think would sell far and wide if I would just replicate it for a production run. They look bewildered when I tell them that it just doesn’t interest me. Don’t get me wrong, Money is a motivation for me, just like it is for most people, but I have this stubborn streak that keeps me pursuing the route I’m on. And that is where I think the inspiration comes from.

Every time I’ve tried to think of an idea that would sell, it just doesn’t come; I sometimes find an old sketch pad and can see those patches of Maker’s Stump from when I was trying too hard.

So where does it come from? A big inspiration for me is work itself. I will be making a piece and as I turn it over in my hand, look at all the angles, and it’s then – that’s when the ideas come to me: ‘If I did that there or took that idea and flipped it …’

I might have to stop work to collect the kids from school and, while still in that same headspace, I might get stuck behind a car with a cool badge, a lorry with a logo, or even a fixing on a trailer. Some times ideas might also come to me when I’m listerning to music or I might just have a random idea, then it’s back to the sketch pad or leave it to evolve in my head.

Every now and again an idea will come from absolutely nowhere. Just planted in my head, as if gifted to me. I have often heard artists talk about their work being channelled through them by a greater force or from a higher plane. I kind of get what they are talking about, it doesn’t happen very often but I have felt like I might have had a fairy on my shoulder before telling me what to do.

Other times I might see a piece of artwork, a painting or a photograph that sparks something. This happened recently when I saw a photo on Instagram by Magnumlady (Check out her blog), aka Val Robus. Val had taken a photo of a puddle and its reflection (one of a series she calls Hidden Depths). The image immediately took my imagination and I knew straight away I wanted to make it into a piece of jewellery. The puddle was in a pothole on a grey road surface, and within it were reflected tree trunks and branches bathed in, what I guess, was the fleeting light of the setting sun on an otherwise stormy day. Val has a knack of seeing beautiful things in everyday places and situations that you might ordinarily walk by. 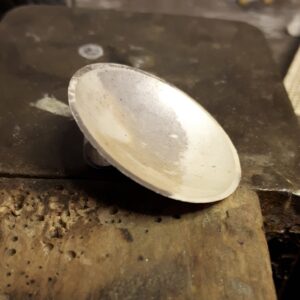 I set to work cutting out the shape of a wooded scene from sterling silver in the forefront of the piece and then added trees further away to be spotted through a clearing, made from 18ct yellow gold. As the piece evolved, I took more inspiration from the idea of a possible stage set design, maybe a scene from “Little Red Riding Hood” or” Hansel and Gretel”, and whilst piercing out the tree shapes I was reminded of shapes in the work of ceramicist, Clarice Cliff; another piece of inspiration that must have sat in the recesses of my mind since long forgotten episodes of Antique Road Show. 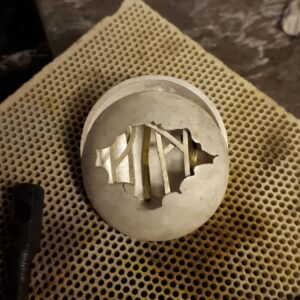 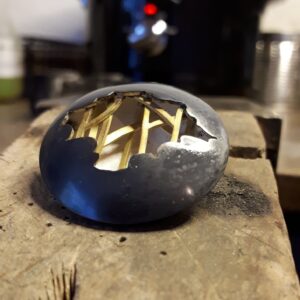 My jewellery designs sometimes change in the creation process as ideas come to me and sometime they stay exactly as they were first conceived in my head or developed in my sketched pad. I can’t say there is a formula that stays the same but I do know that each piece takes me on a bit of a voyage of discovery.

To buy this piece and other work, contact me here

About the Tiffany Budd